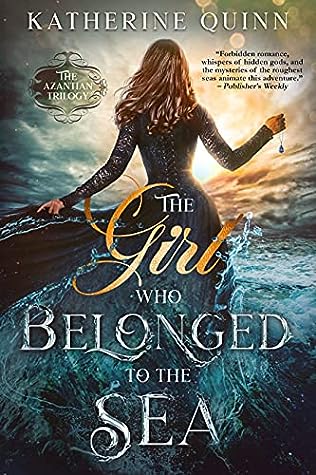 Title: The Girl Who Belonged to the Sea

One woman chosen by the God of the Sea. A king hellbent on saving his mysterious island home. And a forbidden romance that could destroy them all.

Forced to marry the wealthy Count Casbian by her power-hungry father, Margrete turns to the gods, praying for a life free from the men who wish to rule her. Across the sea, a ruthless immortal answers…

Planning to use Margrete to reclaim a powerful relic stolen from his people, Bash, a devilishly handsome king, kidnaps Margrete on the day of her nuptials. Bringing her to his home, the mystical island of Azantian, it isn’t long before a devastating secret is revealed—one that ties Margrete to the gods themselves.

Drawn to the spirited woman he’s sworn to hate, Bash cannot stay away from Margrete and the passion she ignites within him. When the lines begin to blur, Margrete must make a choice between a fiery love, and saving the realm from the dangerous magic awakening inside of her soul.

The first book of this exciting fantasy trilogy is perfect for readers who love high-seas adventures, swashbuckling heroes, and forbidden, steamy romance. Fans of Danielle L. Jensen’s The Bridge Kingdom, and Sarah J. Maas’s A Court of Thorns and Roses will be enthralled.